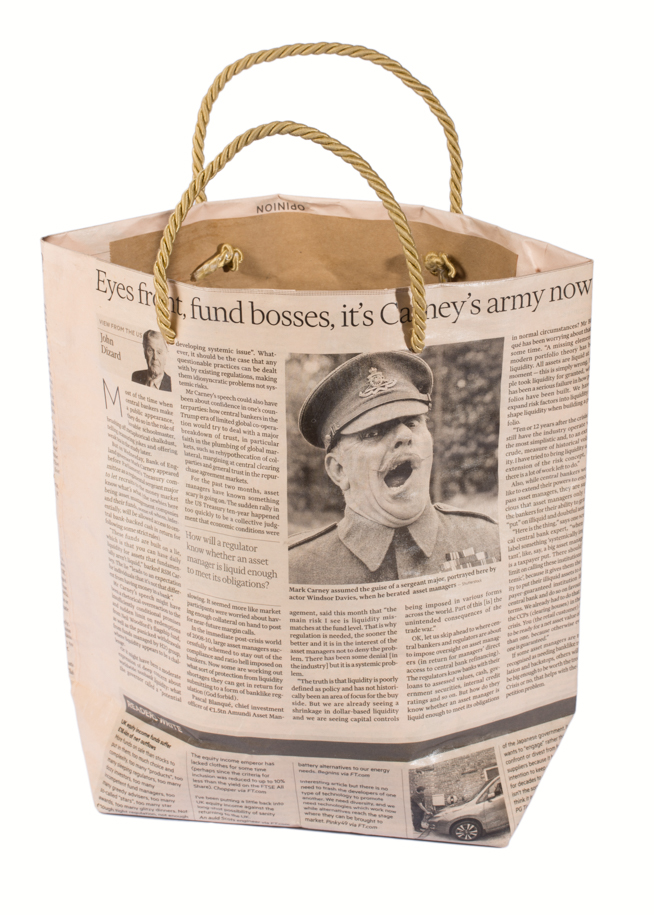 Giving a second life to paper, especially newsprint, is the goal Karin Chiron set herself when she founded BIS, a company that produces bags from recycled paper. In this interview with she highlights the work done by the students of the BTS CRSA of the Pasquet high school in Arles to develop the machine used to make recycled bags and her ambition to be able to reach the whole of France through this production made in France in the coming years. Translated with www.DeepL.com/Translator (free version) Interview.

Feat-Y: Where did you get the idea to launch BIS?

Karin Chiron: The idea came to me from an object that already exists. These bags made from newspapers were made in India, in the street. We used to find these bags the same way we used to find plastic bags in our supermarkets at one time. Now there are kraft paper bags. Over there you would find this style of bag, made from newspapers, with two perforations and simple straps. Today, they are not so easy to find…. A few years ago, I was brought back a bag like this, which I kept for a very long time. Then one day it came undone. I was sad not to have it anymore. So, as I’m used to redoing everything, I observe, I hull and then I try, I made my own bag. That’s how it started.

Karin Chiron: “We use what already exists to give it a second life”.

Feat-Y: What types of bags are made of recycled newsprint? Do they depend on the quality of the newsprint in question?

K.C: There are, indeed, several types of bags. The original BIS is made from newsprint, just like the Indians. Then, I declined a whole set of bags of different sizes with corporate paper waste. That is to say any type of paper, whether it is the poster for the theatre, festival, museum, place mat, city map, brand presentation catalog etc ….

Today, to make these bags, I use all types of paper and company waste. Company is a general term to say that it can be a municipality, tourist offices, tourist places or individuals, since I realized, while developing this project, that people were very attached to paper. They have a very emotional relationship with paper. There are people who bring me magazines from 1950 that were in their basement and belonged to their parents but they never wanted to get rid of them and yet they never look at them again. They like the idea of leaving them with me to turn them into bags much more than they like the idea of throwing them away and seeing them disappear like that.

The company will manufacture both manually and mechanically bags of the same type as the kraft paper bags found everywhere. But instead of creating a material to make these bags, we use the existing material to give it a second life. Then, I decline with bags a little more creative, where I can use sewing, leather and other materials (always recycled). Here, it’s another type of bag, a little more design, transport bags or handbags original and unique.

Feat-Y: You plan to launch industrial production of BIS bags from next June, by being located in the industrial zone of Arles. What do you need to fully ensure this start?

K.C: I had the construction machine built by the Pasquet High School in Arles, with aBTS CRSA(construction-realization of automatic systems) class. The class of 2020-2021 is making the machine that will allow me to produce in larger quantities, the production will be both manual and mechanical. The company 3R is created and it moves into its premises in April, with employees. I chose to create an integration company. Today, what I am missing is the sinews of war… financing for this machine. Afterwards, there is the whole environment of the company to create, with the necessary equipment for manufacturing.

Feat-Y : You have requested a BTS class from the Pasquet high school in Arles for the manufacturing of the machine allowing the production of the BIS. How did you get in touch with the school, the students and what are the prospects for the future?

K.C.: I am very lucky in this project which brings together a lot of people. I think this bag has a good sympathy capital. In fact, I entered a European program (SMATH) in October-November 2019. In March 2020, BIS won the European Innovation Award. But seven days later, we were in containment!

At that time, I started thinking about my means of production and I realized that I had to find a faster, more efficient way of producing. When I came out of confinement, I met with the Direccte, but also with the Region, the Department, and the integration federations. I met a lot of people and it was their convictions that drove me to create the integration company. With them I understood that I would not be alone in doing all this!

At the same time I went to meet the Pasquet High School. The first person I met took me directly to the technology rooms and I started to explain the project. I immediately saw in the eyes of the teachers and students that they liked it. I came back and spent several hours with the three professors. I showed them how I did it. We dissected the gestures and for several months, with the students, we refined the specifications of the machine, that’s how it started.

It’s incredibly rewarding to work with them, they bring me a lot, they force me to think more relevantly about the production machine. They make me progress a lot.

Feat-Y: As this is an industrial production, what spatial scale are you aiming for in order for BIS to be viable?

K.C.: I built my project so that in three years, we would be totally autonomous and that there would also be a very rapid network throughout the country. It is important to know that at the moment, no one else makes bags like this. To begin with, I would obviously produce regionally, but this project has all the capacity to expand rapidly.

BIS is an innovative solution, it promotes circular economy and includes recycling, reconditioning and ecological design.

It is an object each time unique and original. Its manufacture reduces the amount of waste destined for storage or incineration. It is also a communication support for companies. We know that 85% of passers-by notice the messages printed on the paper bags they see in the street. All the more so if they are affixed to an original bag like the BIS, which is in itself a strong sign of the consumer’s commitment to the ecological gesture.

Link to the crowfunding campaign: