Accueil - Zeste - Zeste.coop: Bring your projects to life with peps 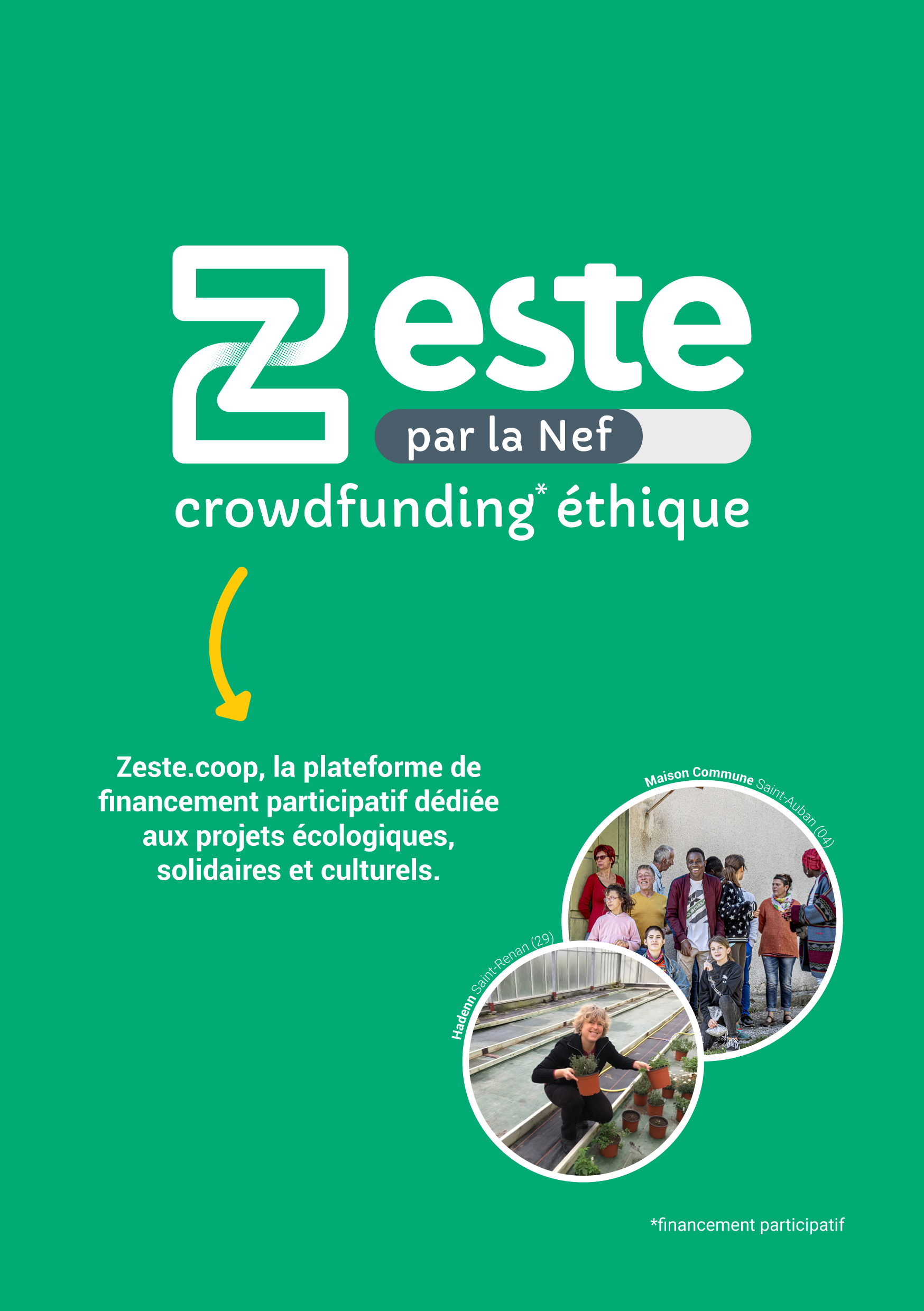 Aurélie Dejoie: “Our objective is to offer a complementary tool to all these projects whose values we share”.

Feat-Y: Could you remind us of the history of the Nave?

Aurélie Dejoie: La Nef is a financial company that was created in 1988. It was originally an association of a few people who were looking to invest in an alternative school for their children in the countryside. Mais ils ne trouvaient pas de banque. So they teamed up with each other to be able to finance this school. That was in 1978. Later, observing other projects, following an alternative approach (organic, ethical, traceable…) for which the banks at the time showed no interest, they told themselves that there was something to be done. So they created the financial company to help this type of project to find financing. The idea of the Nave is to rediscover the primary vocation of a bank; that is, to build up savings among citizens and to use these savings to finance projects in the real economy. The Nave is not, and never will be, part of the speculative markets and it seeks to have a closed circuit around money. That is to say, it uses the money from citizens’ savings and thus finances projects based on its own eligibility criteria, i.e. a project must fall within one of these three areas: ecological, cultural or social. On this basis, a project can apply for funding from the Nave. Of course, the project must be viable, with a financing plan that is consistent with the field of activity in which it is to be carried out.

Feat-Y: For what reason(s) has the Nave launched its participatory financing platform, called Zeste, and what is the objective?

A.D: It happened in 2015, when borrowers from the Nave asked us if we had a participatory financing system. They were looking to have this complementary brick in their financing plan, but couldn’t really find what they wanted on the different platforms at the time. They were looking for a certain coherence in their approach. They approached us to find out if we were doing this formula and it’s true that it was something that was in the drawers. So at the request of these borrowers, we said to ourselves: “We’re going for it”. In 2015, we launched the beta version of Zeste and in 2016, Zeste was baptized. We officially launched at that time. Our objective, through this platform, is to offer a complementary tool to all these projects whose values we share. To try to accompany them in all their financing processes.

Feat-Y: What are the criteria to be eligible for this platform?

A.D: These are the same eligibility criteria as those of the Nave with the difference that we do not ask to study their business plan. Note that not all Zeste projects are necessarily borrowers from the Nave. One is not obliged to take out a loan from the Nave to be supported on Zeste. Not all projects have a bank loan to begin with. Similarly, it is not by campaigning on Zeste that you get a bank loan from the Nave.

We therefore support all projects (associations and companies) whose approach is ecologically, socially and/or culturally based.

Feat-Y: How many projects have been supported by the Nave, via the Zeste platform, so far?

Feat-Y: Does the Nave’s ultimate ambition is to be able to support participatory financing projects outside France, for example by supporting projects from French-speaking countries, or is this too broad a scale?

A.D: For the time being, it’s a little too large a scale. We are constrained by several regulations, because we belong 100% to the Nave. We operate exactly the same way. For us, it’s complicated to support projects abroad because the documents are not exactly the same. We are not in a position to follow up as carefully as if it were a project coming from France or the French Overseas Departments and Territories. It would, indeed, be something that would interest us. We thought of Belgium and Switzerland. But for the moment, it is on stand-by.

Feat-Y: You were just talking about the DOM-TOM. What proportion of the projects supported by the Nave come from the French overseas departments and territories?

A.D: It’s rather anecdotal. From memory, there must be four or five. That’s really very few compared to the number of projects we have.

Feat-Y: Could the Nave initiative be supported by other financial institutions, which would become partners, in your opinion?

Aurélie: For Zeste, the search for institutional partners is not on the agenda. For the Nave, it’s different. The Nave has its own needs. Having institutional partners would undoubtedly be beneficial to it. For Zeste, we are not there yet. We are rather looking for partners in the social and solidarity economy network. Typically, we are talking with the Réseau Vrac, Alternatiba, Les Cigales AuRA… this type of network, which accompanies a lot of projects in the field and which, for some, may need participatory financing. Typically, we are getting closer to this type of network to establish a partnership of visibility and personalized support.